It’s a very exciting time here at Burns Sheehan as we are currently experiencing a period of immense growth in the team and are always looking for great people to join us. If you are looking for a new opportunity to join a fast growing recruitment team, then get in touch!

Simon Evans joined Burns Sheehan in 2009 to head up the Banking and Finance team. Three years ago he changed markets to Cloud Computing, where he is now building out a team beneath him.

There has been some dispute around the office as to whether Simon is permanently grumpy, or permanently cheerful. Turns out that Simon is cheerful when he is grumbling, or when he makes Becki grumble with his rather dry banter.

Regardless, we all love Simon for he’s sometimes outrageous sense of humour, his charming phone voice and his positive, down-to-earth energy. But there are tons of things about Simon we don’t know: How does he know so much about history? How has he found balancing his career in recruitment with his new second job as Dad to his unbelievably adorable baby girl Astrid? I sat down with the man to find out…

I would have Will Ferrell play me in a film. I just love his level of stupidity…He’s a big character and makes the stupidest things funny.

What is your favourite Will Ferrel film?

It changes, but at the moment it’d would probably be Step Brothers. There are plenty of classics too, though, like Old School, Anchorman of course… (gazes into the distance)

Contradictory to my previous answers…I think my biggest pet hate is general stupidity. I really struggle with people who are genuinely stupid. Rudeness comes a close second. I know it encompasses a lot of people on this planet!

Can you tell me about a book or film that has recently inspired you?

Well it’s a touch heavy, but I just finished book by Romeo Dallaire who was the general in charge of the UN mission to Rwanda and obviously failed to stop the genocide there. It’s about what he went through and what they went through. I don’t know if inspiring is the right word, but there is an inspiration behind the story that he came out of something so horrific – something that nobody will ever be able to understand - and after about ten years after the genocide he was able to gather the strength and work through the post-traumatic stress to write about his experience. The process of writing the book was probably quite cathartic for him.

I hear you are quite the history buff and read a lot of books in your free time. How did you find this passion? Did you study history at university?

I actually applied to various places to study History but – going back to the stupidity thing – I didn’t get the grades I needed so I didn’t do it (laughs). It was probably a good thing because at the time – as much as I loved studying history - I was probably more into watching war movies than reading, whereas now I have developed quite a deep interest in reading about history of all types.

What sort of music do you listen to? Your deal song (More than a feeling) is quite different from the others!

Rock. (Haha) I’m more guitar based. I guess you’d call it indie as I was growing up in the late 80s so it’d be Stone Roses, Charlatans, Happy Mondays – that sort of stuff. Mainly guitar-band driven, but a bit of cheeky hip hop sometimes gets in there. I actually just changed my deal song to Cigarettes & Alcohol by Oasis though as I think it’s a better reflection of my life as a recruiter!

These days I spend most of my time with my relatively young new daughter, Astrid. She’s now about seven months old. So it’s mainly spending time with family or friends. And working hard - put that in there for Burnsie – working really, really hard so it’s nice to get to the weekend and just relax.

This is your first daughter, right? How has it been adjusting to life as a dad?

Well, it’s been a huge change and I’ve had to change my lifestyle quite a lot. As someone who was used to going out quite a bit it’s probably quite a good thing at my age to calm me down. At the moment she’s been a dream to look after – she’s been sleeping through the nights since she’s been about three months old. But my girlfriend and I are bracing ourselves for the terrible twos, adolescence and teenage years already!

Do you have any tech gadgets on your wish list?

Drone! That’d be awesome. I probably shouldn’t say this but I’m not the most technical person in the world. A mate told me about the new curved TVs and said it’s actually amazing. I was a bit sceptical at first because everyone’s been banging on about flat screens for the last ten years or so and now we’ve got this big curved TV that will take more space but it sounds really great so I think that’s probably on the wish list.

Are you a morning person or a night owl?

…Um…More, middle of the day? I get up early on the weekends so I guess I’m a morning person.

What is your guilty pleasure?

Yeh, I don’t tend to feel guilty about my pleasures at all. I’m completely unrepentant about most of them so I guess I’ll throw in Downton Abbey because it’s something I feel I shouldn’t like but I do.

What do you think is the best thing about recruitment?

I think because it’s an industry that is so looked down upon, it’s hugely rewarding when you’re good at what you do and you do a good job you starting earning respect from your clients and candidates and developing really genuine and strong friendships and relationships as you grow your network. And of course, if you make deals across the back of it then that’s brilliant!

What do you think is the worst thing?

Probably on the other side of that coin is the fact that the industry has such a bad reputation that it can be a real struggle getting respect from certain people. There’s a portion of the working population that will probably never change their perception of recruitment and what recruiters are like so they are reluctant to properly engage with you, which makes it difficult to provide them the level of service I’d want to give.

Well it’s from one of the worst businessmen in the world, but he was actually really great at training. One of the best pieces of advice he ever gave me was: “If someone can’t tell you yes, don’t let them tell you no. And if they really can’t help you find someone who can.” It can apply to anything from your career to dealing with an electrician…anything in life.

If you were speaking with a student or recent grad who was interested in a career in tech recruitment, what advice would you give them?

If you’re going to do it, do it properly. You have to really commit to recruitment when you start or else you won’t be successful or get an understanding of what recruitment can offer you as a career. The first year is going to be tricky… you’ll be learning about your market and building a network, but if you do things right in your first year things will get easier and you should start seeing the rewards.

And can you describe yourself with a picture ?

Want to get in touch with Simon to talk about your career and the latest opportunities in Cloud Computing? You can connect with him on LinkedIn or email Simon@burnssheehan.co.uk. 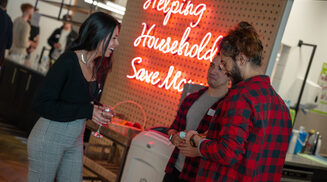