I look after all things Cloud, DevOps and infrastructure for the Manchester team, and it was a real pleasure to be able to organise and host this event. To repeat something I told the audience on the night; our collective aim is to be the best technology recruitment business in the North West, and being able to use our platform to bring together a community is really strong evidence that we're on the right track. 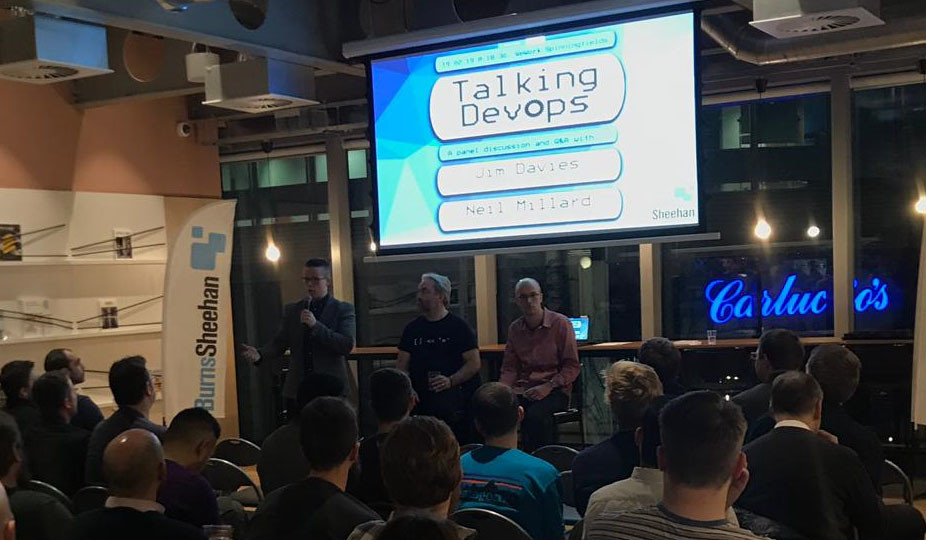 So, if you were unable to make it or were simply unaware, what did you miss?

In a nutshell, we sat Jim Davies (Head of DevOps @ MoneySupermarket) and Neil Millard (Lead Operability Engineer @ Equal Experts) in front of a full room of technologists and barraged them with questions.

Jim was able to draw upon a decade at MoneySupermarket, where he's risen through the ranks and played a pivotal role in their emergence as one of the North West's most exciting (and successful) technology businesses. Neil, an experienced consultant who also enjoyed a stint at MoneySupermarket alongside Jim, specialises in guiding large organisations through automation & cloud journeys.

From CTOs and Heads of Development through to DevOps Engineers, Developers, QAs and even a rogue Data Scientist, the audience did not let us down. Jim & Neil were a great value, offering their thoughts on a wide range of topics, including:

After the conclusion of the formal session, Jim & Neil stuck around to speak with audience members who didn't get to the microphone in time, and a number of us carried on the debate down the road at Alberts Schloss. The pure Q&A format seemed to be really popular and it was really gratifying to see such an engaged audience make real use of it.

Once again, I'd like to thank everyone who made the evening a success. Jim & Neil; everybody who asked a question and the audience as a whole; the rest of my team at Burns Sheehan; WeWork for providing the space, functionality, and plenty of full barrels. Here's to the next one!

If you'd like to be a part of our upcoming events in 2019, I'd love to hear from you. Naturally, the same goes to anyone looking to hire or be hired within Cloud, DevOps & Infrastructure.

I'll finish with a few links & resources referenced on Tuesday. It would be rude not to start off with a cheap plug for Neil Millard's new book, Who Moved My Servers?