When I first met Luke at the Burns Sheehan 10th Anniversary Party my first impression was that he was thoughtful, friendly and impossible to fluster. He's one of those guys who may have a lot on his plate, but you'd never know it.

But after working at Burns Sheehan for a few weeks, I realized there is another, brilliantly hilarious side to Luke. He's like a closet joker - one moment he'll be calm and getting on with his work, the next he'll be throwing about some banter or doing something ridiculous to make everyone around him chuckle. Despite being one of the quieter guys in the office, he's clearly a core member of the Burns Sheehan family and plays an important role in reminding us all to not take the recruitment game too seriously and have some fun from time to time!

Apart from being a family man with a strong passion for music, I didn't know much else about Luke. I decided it was time to sit down with the man himself to learn more...

How did you come to work for Burns Sheehan?

Well, I’ve been close friends with Chris since we were about 18. Chris got me into Recruitment and was instrumental in getting me my first Recruitment job at Abraxas, working for a guy called Gareth Dow in the New Business Contracts Team as a Resourcer. Interestingly enough, a year earlier, I interviewed with Mat Lilley who was already at Abraxas and he rejected me in favour of someone with a few months Recruitment experience! (We're all now good friends with this guy.)

After Abraxas was taken over by Randstad, Mat and I were both made redundant. Mat took some time out and eventually ended up at Burns Sheehan and I went to the JM Group to do investment banking IT recruitment. I’d just bought a house so I needed a job quickly so I pretty much took the first offer I got. I met some great people there who I'm still in touch with today but I wasn’t too happy there at all. So when Mat got in touch about 9 months later to ask if I was interested in working for Burns Sheehan I jumped at the opportunity and joined Burns Sheehan in June 2010. And then a little while later I got Chris to join Burns Sheehan!

What an amazing story! So you’ve been at Burns Sheehan for about 5 years and now specialize in DevOps recruitment. What do you like about that area?

Yeh, I’ve been specializing in DevOps for about a year and a half. It took a while for it to take off, but I really like working in this space. It’s a relatively new and fast-growing area that combines both development and systems administration. I wouldn’t say I have deep technical expertise in this space though, just enough to speak their language to know they have enough experience and knowledge to fulfil the role’s requirements. A lot of my focus is still on finding people with personalities that would suit the culture of the business and aspirations that could be met by the opportunity.

What is the best thing about working in recruitment?

Everyone says it but it’s true: the best thing about recruitment is that every day is different. It’s a great job to have if you’re working for the right company and you’re in it for the long term.

I don’t think there are many companies like Burns Sheehan that make the job so rewarding though, and that comes down to the people we work with – both at Burns Sheehan and the people in our networks. I like the way Sean and Jon choose the run the business. We also have a good work-life balance here: the culture and hours allow everyone to spend plenty of time with their kids or having an enriching life outside of work, which is relatively rare in the recruitment industry.

If you’re in it for a quick win it’s not going to work though – you won’t get so much out of the job and it might be hard to change industries as you’ve been pigeon-holed as a recruiter.

What’s the worst thing about recruitment?

The worst thing is that there is still a stigma against the industry that we’re constantly having to prove ourselves. I think Burnsie mentioned this in his staff corner last week and it’s true - there are plenty of bad recruiters out there, but we try and do it the right way. It’s tough when we’re put on the same level as bad estate agents and have to overcome a number of preconceptions before gaining people's trust.

I've got two kids and another on the way so a lot of my time is taken up wiht the family, which I welcome. I play the guitar too, so when I can I like playing a bit of music and watching Chelsea (mainly on TV nowadays), not much else. I don’t go out too much anymore, bar a ruby and a beer with a few mates every so often. I probably spend about 90% of my free time with the family.

I understand that you want your kids to learn about technology from a young age.

Yes, I definitely want my kids to learn about technology and how to code. My eldest daughter, Ava, is only 9 but she is learning how to programme using Rasberry Pi. It’s brilliant !

I’m also keen for my kids to be musical so she’s also learning how to play the piano. We have a keyboard at home at the moment but I want to get her an electric piano with more weighted keys so it feels more like a real piano.

What did you want to do when you were growing up?

Working in music, mainly as a backing guitarist in a band. I studied Media at Uni and I really wanted to be a sound engineer away on film sets for months on end. I actually did a bit of this on the TV show Flog It!, but I soon realized that I'd need to start at the bottom which would mean a low salary and would be on set all the time so it wasn’t an appealing option anymore. I still play the guitar quite a lot at home though. If I had the time I could play all day long!

Probably Facebook. I don't like all the pointless attention-seeking status updates that people put up such as "Feeling so lonely at the moment" or "How about things in my life go right for a change" but I can't help but check Facebook at least 5 times a day.

I'm also a member of the Sunday Times Wine Club, although I actually know very little about wine!

What is your biggest pet hate?

Probably soap operas and trashy tabloids. I’m not a snob though!

I'd say anyone from Monty Python as they're all lunatics and the stuff they come up with is completely insane and utterly out of this world in terms of alternative, nonsensical humour.

Tell us something that nobody else knows about you…

That’s awesome! What did you do?

I sang ‘Take it Easy’ by the Eagles. I didn’t go to audition though. I only went with a friend who took her guitar with her. We were playing in the queue and someone said I should audition too, so I went for it. I didn’t get anywhere but it’s still a good story to tell.

What’s your philosophy towards work?

Well I don’t want to sound too much like Burnsie, but I think if you’re going to do something make sure you do it 100%. And always be respectful. We put that above everything else which means we’re playing a longer-term game than other recruiters out there, but I’ve always put friendship, loyalty and respect for others above everything else.

I got into recruitment and didn’t think I’d do it for more than a few years, but I'm glad I stuck with it. The first couple of years in recruitment it’s different because you’re always proving yourself. When you get more senior the job gets easier, but then you also have management responsibility and usually you have bigger responsibilities in your personal life too.

Well I'm always taking note of what people do and say - people like Mat, Chris, Burnsie and Baz - and I think that has influenced me and my career.

There was one guy who used to work here – Darryl – who told me when I was quite new to recruitment: “Don’t take this game too seriously” and I think he’s absolutely right. You’re dealing with people in recruitment - you’re selling people to people - and that can make the job quite unpredictable as people can change their minds or lie to you. If I sold you this cup, the cup wouldn’t turn around and say: “I don’t want to live in your kitchen anymore!”. I used to go home and not be able to sleep because I’d worry about whether candidates would say yes or no to an offer, but that advice has helped me learn how to not take everything too personally.

What has been your biggest career highlight?

Probably coming to work for Burns Sheehan! I knew what Mat was like at Abraxas, in a good way (laughs), so when I heard that Burns Sheehan had hired him I knew they were serious. Obviously in the last two years I’ve grown and have taken on more responsibilities. It’s also been great to work with my mates, like Chris.

If you were speaking to a student or recent grad who was thinking about getting into recruitment, what would you say to them?

Think long and hard before you get into recruitment because it won’t click overnight - it’s a job where you really have to persevere. It’s important to find the right company for you, too. It’s so hard to know what that would be as a grad, but I’d tell them to think about what they’re looking for in their first job and explore a few different options when they kick off their job search.

And finally, can you describe yourself with one picture? 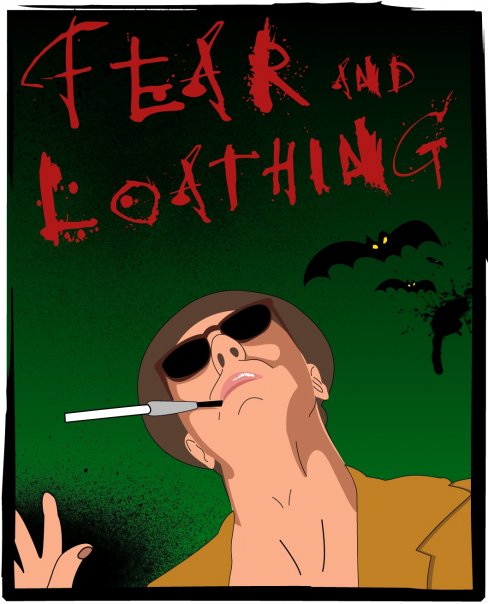 This is a cartoon a friend did of me - I promise I have no other connection to the film!

Want to have a quick chat with Luke about your career prospects and what’s on the market? Connect with him on LinkedIn or email luke@burnssheehan.co.uk.